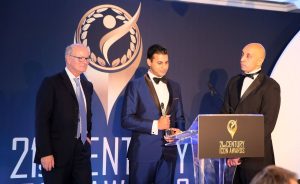 The award is for someone who has demonstrated steadfast and unfaltering belief in his/her own diverse family businesses and enterprises contributing to growth and expansion.

The 21st Century Icon Awards celebrate success of the next generation by helping dynamic entrepreneurs and successful individuals to keep growing and competing on the world stage.

The Awards are the brainchild of Tarun Ghulati, Founder, President and Chief Executive Officer and Preeti Rana, Founder, Chief Creative Officer of Squared Watermelon Ltd which hosted the Awards.

The winners of the 21st Century Icon Awards 2018 mingled with 300 Celebrities, Business Leaders, Socialites, Film Stars, Sports Champions, Thought Leaders and Politicians all gathered to witness these global, unique and distinctive Awards.  They symbolise and embody true success and have been acclaimed internationally.  In all, 23 winners were carefully shortlisted and selected from over 400 Nominations based on research, personal meetings and nomination papers submitted.

Executive Director Hatul Shah said: “I am absolutely delighted with this recognition and I can only attribute it to the example and encouragement I have received as a young man, which has definitely been the foundation of my professional journey.  It is now important for me to try to inspire and encourage the next generation of young entrepreneurs and leaders in the business”, he said.